To continue with our trip: Of course, we made plans to visit the most famous lighthouse of all–Cape Hatteras, also known as America’s Lighthouse. Confession: I thought it was the only lighthouse on the Outer Banks. I obviously need to get out more. Since we stayed in Kill Devil Hills, our trip to Hatteras took us close to two hours. Recent hurricane weather had flooded the roads and what was to be a “scenic drive” was mostly driving through water and seeing rather large sand dunes on the sides of the road. Still, I enjoyed the drive and what scenery we could see.

Having climbed one lighthouse and spending $10 for the privilege, I was content to view this lighthouse from the ground. My husband, however, was up for the challenge (and saw a deal in $4 for seniors) and made the climb. I promised to wave to him when he got to the top, but spent a little too much time in the museum and gift shop, or bookstore. Someone waved to him, however, (who apparently looked amazingly like me–from the top of a lighthouse anyway), so thanks whoever you are! 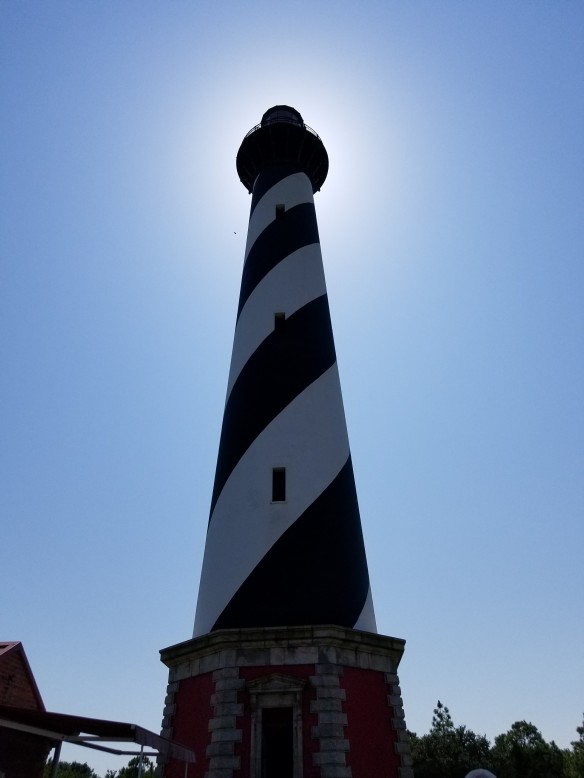 We also visited The Graveyard of the Atlantic Museum. (I don’t know why I didn’t take a picture outside. None were allowed inside.) The most interesting sight here is the “lost lens” from the original Cape Hatteras Lighthouse. There are also artifacts from the ghost ship Carroll A. Deering. This ship passed Cape Lookout Lightship on January 29, 1921. Some months later, the ship was found abandoned and no one knows what happened to the crew. For more reading on this mystery: https://www.nps.gov/caha/learn/historyculture/theghostship.htm

On our last day, we started by visiting the Wright Brothers National Memorial. Though the museum is still under construction and won’t be open until next year, we were still able to climb the hill that had been the sand dune where the brothers performed many of their experiments and now displays a monument in their memory. This climb was almost as difficult as the one up the lighthouse and will give you a new appreciation for the determination the Wright Brothers had and the work they put in to learn to fly. Reading David McCullough’s book The Wright Brothers last year helped me to understand better what the Wrights accomplished. I’m afraid the vision I retained from my elementary days was of a couple of old brothers jumping off a sand dune with a strange-looking contraption. Obviously, there was quite a bit more to it than that, and I can highly recommend McCullough’s book for more detail. 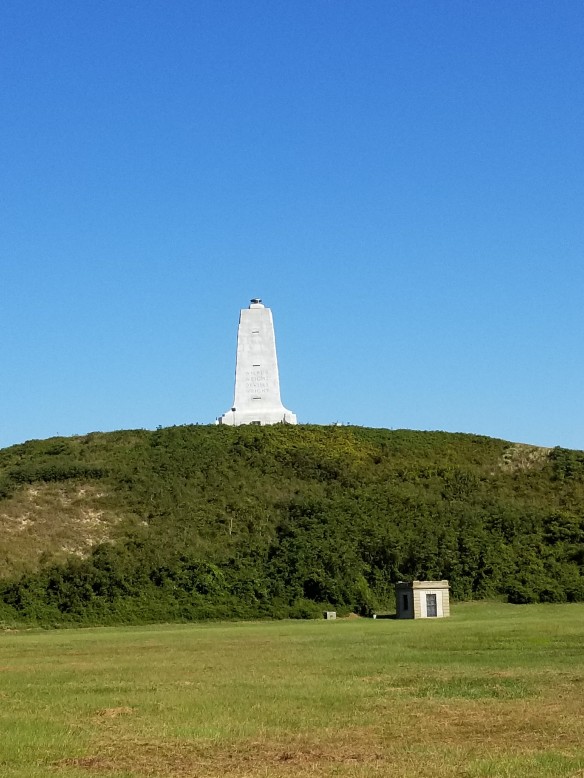 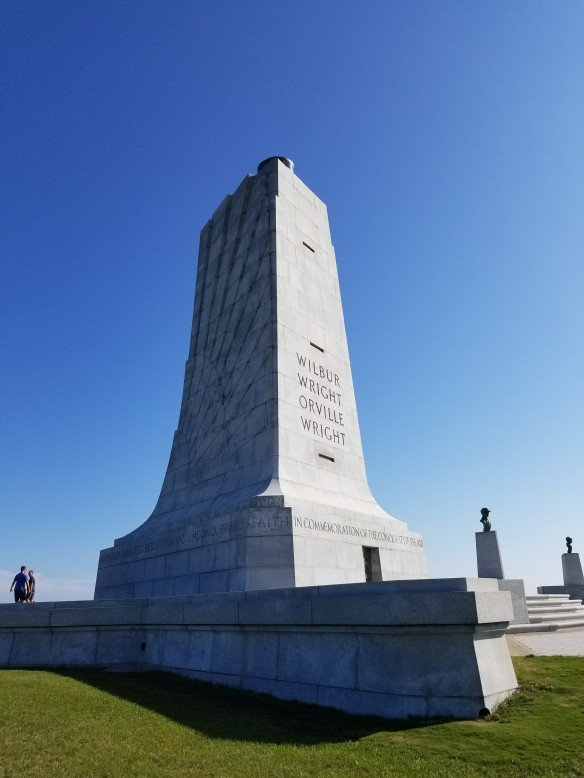 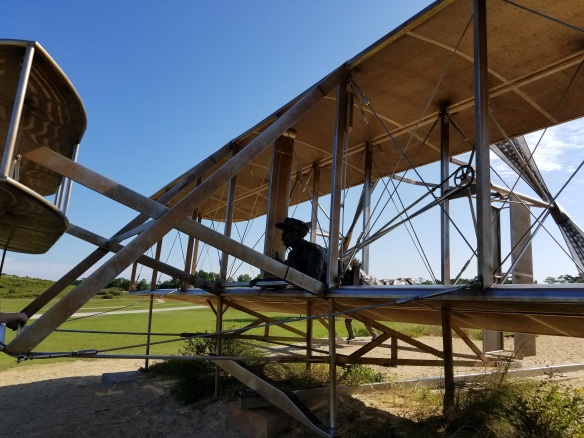 As no vacation would be complete without a visit to at least one bookstore, we visited a couple, including ones at every historic site we toured as well as the Island Bookstore in Kitty Hawk. 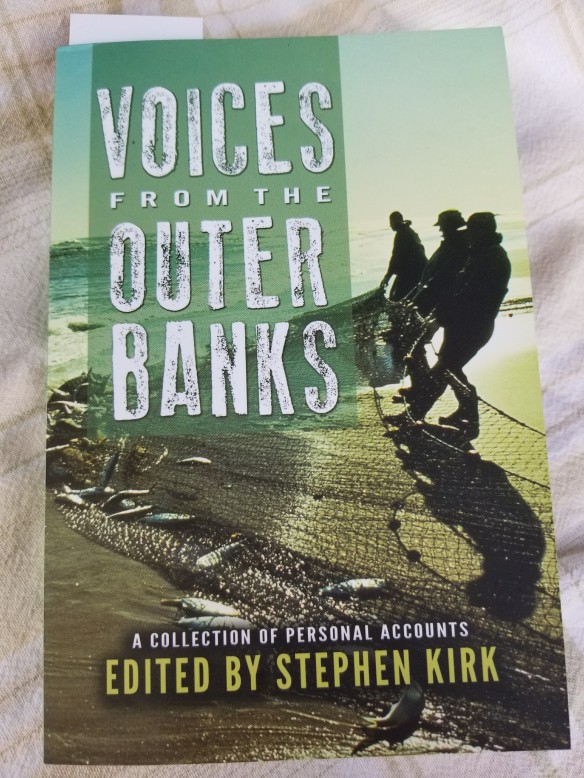 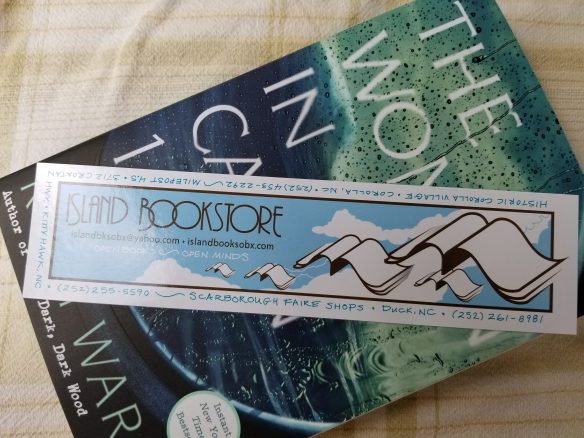 And, finally, though we ate some good food at several places, I had to make a stop at Duck Donuts before we left. 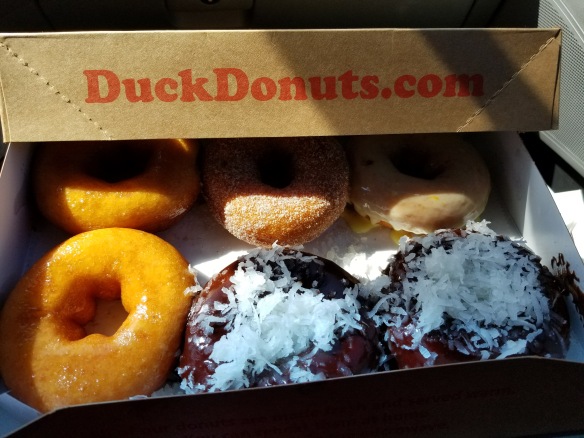 There’s still much we didn’t see on our trip to the Outer Banks, so hopefully, we can go again someday. Maybe I’ll even climb another lighthouse. How about you? Visited any lighthouses lately?