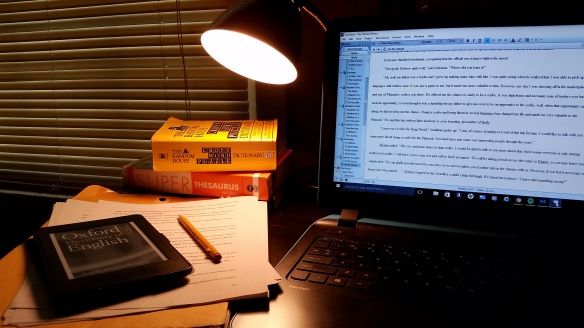 Reading through the first draft of my work in progress, a very kind friend noticed a few words that were a bit overused. One of them was the word “various”. I had “various” birds, “various” foods, “various” colors, “various” fish, and even “various” mothers. She even suggested (gently) that this word might be a crutch for me.

That kind of hurt, but in rereading another chapter, I found another overused word–“curious”. Curiously, I seemed to have had a hard time spelling that word, so, really, you would think I would have been looking for synonyms even before I realized I had used that same word four times in a single page.

Doing another read through some more chapters, I decided every time I saw the word “various” that I would circle it with a blue colored pencil. What was it about that word? It’s not even a great word. It’s actually kind of lame. Boring. “Various.” Really? What about diverse? Manifold? Miscellaneous? Sundry?(Now, there’s a good word). However, it’s become a bit of a game to me to see how many times and in how many various places I have been able to work that same word into a phrase. I mean, you would think I had entered a contest where the prize went to the writer who could find the most ways to use a certain word in many different (and various) ways.

On the other hand, there are other words I’m reluctant to use because it might seem like showing off. For example, this morning I used the word “quirk” twice in my current writing. You know, “he quirked a smile” or perhaps an eyebrow. Great word–quirk. Much more interesting than “various”. But, I don’t know. Does that fall under the rule of not using a “fancy” word when a more familiar one will do? Of course, if I use it enough times, won’t that make it more familiar? Or maybe it’s not really fancy at all. Just because I don’t use it in everyday conversation doesn’t mean it’s not commonplace in another place and time.

Another interesting fact about words is that they can run in cycles. Remember when everything was “awesome”? I like that word, but hesitate to use it after hearing that so many people had “awesome days”, own “awesome dogs”, make an “awesome grilled cheese”, or saw an “awesome sunset.” Still, I don’t want to throw it out the window just because of its overuse because it is, after all, an awesome word. But, I will proceed with some caution when I want to describe anything as “awesome”. For now, when I want to describe a new book, a new song, or anything else that touches my soul, I will probably call it “impressive”, “astonishing”, “breathtaking”, or downright “splendid”.  Any of those various words should do.

How about you? Any words you tend to use as crutches? Or are there some words that you would like to use but feel they have overplayed their hand? 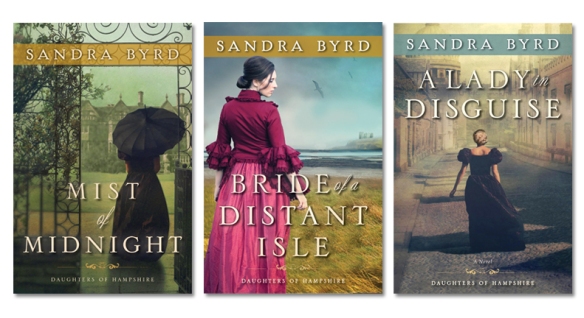 Mist of Midnight is the first in the series, Daughters of Hampshire, by Sandra Byrd. An historical romance, this book takes place in England in 1858. Rebecca Ravenshaw, daughter of missionaries to India, has returned home after the tragic death of her parents in the Indian Mutiny. Unfortunately, she has no time to grieve for her parents and to adjust to life in England as upon her arrival, she learns that someone else has been in her home claiming to be Rebecca. Having to prove that she is, indeed, Rebecca Ravenshaw and the true heir to Headbourne House is her first order of business. Dealing with identity theft in any century is both frustrating and scary. Besides clearing her name, she must learn who the imposter was, how she knew about her family, and what happened to her. Did she really commit suicide or was the cause of her death more sinister?

I enjoyed the suspense in this novel and the historic detail. I especially found interesting learning a little bit about missionaries in this time period. Leaving your home is never easy, but especially in a time when travel and communication were much slower and less reliable than we are accustomed to in the 21st century.

Though the first in a series, the book is a stand-alone. The second book, Bride of a Distant Isle, released earlier this year also takes place in Victorian England, but is a different story with different characters. The third book, A Lady in Disguise, is scheduled for release in 2017.

This is not the first book I have read by Byrd. She is a writer of different types of romance, and I have read her first two books in the French Twist series, which are contemporary romance. These books are fun and lighthearted romances, following the character of Lexi, who is learning to be a pastry chef. In the first book she is in Seattle and in the second book, she is able to follow her dream to study and work in France. 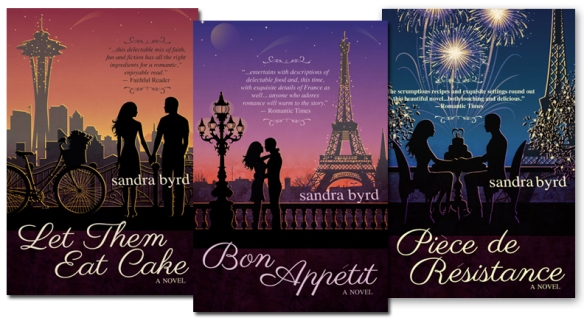 Sandra Byrd writes as a Christian writer, and for romance readers that means, you can expect some good, ‘clean’ fun. Anyone else read any books by Byrd? If you read romance, do you enjoy reading historicals or do you prefer stories set in more contemporary settings? 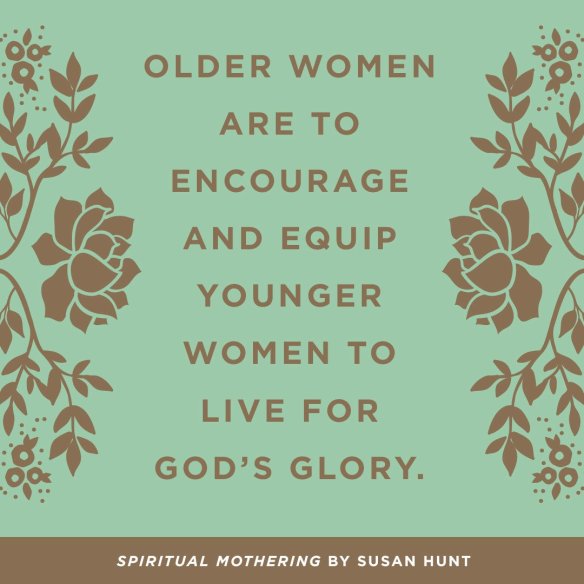 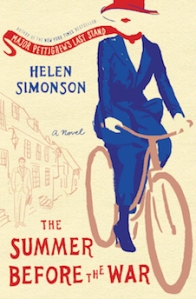 Lately I have been reading several books of historical fiction from the era of WWI. I am currently listening to a Maisie Dobbs audio book, have started a Bess Crawford book on Overdrive, and last night I finished up The Summer Before the War.

The Summer Before the War was a book that I felt improved and was more entertaining and engrossing as it went along. (So much better than one that starts out promising and then the ending disappoints.) It takes place in East Sussex in 1914, in the small village of Rye. The first major event of their summer is the arrival of Beatrice Nash who has come to apply for the position of Latin teacher. Many in the village do not approve of a young woman for this position; especially one that upon arrival turns out to be more attractive than expected.

Beatrice is championed by a prominent woman of the village, Agatha Kent, whose husband works for the Foreign Office. Agatha has two nephews, Hugh, a medical student, and Daniel, a promising poet. Hugh and Daniel have differing personalities but are close and are both adored by Agatha.

When Germany invades Belgium, Rye is quick to welcome refugees and, in spite of those who still believe war won’t come to England, the village prepares to support their country even if it means sending their young men off to war. Soon everyone in the village–the young the old, and all those in between–become caught up in a patriotic fervor. Of course, their young men do go off to war, and what happens to them and the ones who are left to wait for them makes up the rest of the story.

Part of what interests me in reading historical fiction is found at the end in the author’s notes or acknowledgements. Simonson tells of the books she read to immerse herself in this period, as well as the websites and libraries. I love that she was able to read newspapers of the time (and took the trouble to do so). 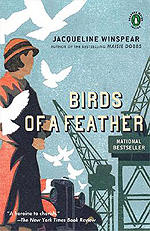 For those of you unfamiliar with Maisie Dobbs or Bess Crawford, they are both heroines of their own historical mystery series. The Maisie Dobbs books are written by Jacqueline Winspear and Birds of a Feather is the second in the series. I’m always looking for audio books with good narrators and a story that I can follow as I drive, walk, or cook. So far, this book has delivered with the excellent narration done by Kim Hicks.

The Bess Crawford books are written by the mother/son team, Charles Todd. I have just started reading the second in that series, An Impartial Witness. A group I belong to on goodreads–Historical Mystery Lovers–will be reading a selection of your choice from Charles Todd during July, so I have a bit of a head start. If you’re on goodreads, check out the group and come read with us.

Reading any WWI fiction or nonfiction? Let me know what you’ve read and can recommend.

An Odd Trio. I took several pictures of these three during the storm on Friday. The nuthatch held that pose for quite some time. I don't know if he was listening for something or waiting for something. #birdwatching #whitebreastednuthatch #northerncardinal #goldfinch #birdsofnc #birdsofcharlotte #backyardbirds
Going through some pictures from last year & ran across this one. Cape May Warbler? Whatever, he is giving this branch a very close look. #warblers #migratingbirds #birdwatching #birdsofnc #birdphotography
Great Blue Heron. He's scratching his head in the second with his leg. I honestly thought he was using a stick at first. In the third, he's giving the old heron cheer. #greatblueherons #greatblueheron #herons #waterfowl #birdphotography #birdwatching #birdsofnc #birdsofcharlotte
Practicing for Thanksgiving. Because the croissants are more important than the turkey. #baking #croissants #baking bread #holidayplans #nevertooearly #thanksgiving22
These two were going at it this morning. Sometimes right in front of my face. I managed to get a few shots of them. #rubythroatedhummingbirds #rubythroatedhummingbirdsofinstagram #hummingbirds #birdwatching #backyardbirds #birdsofnc #birdsofcharlotte #birdphotography
Sitting in my backyard taking pictures of hummingbirds (those will be coming soon) & I looked up & saw this beauty. I've been having a hard time identifying several different yellow birds, but I believe this is a yellow warbler. #birdwatching #warblers #yellowwarbler #migratingbirds #backyardbirds #birdsofnc #birdsofcharlotte #birdphotography
Follow pmgilmer on WordPress.com