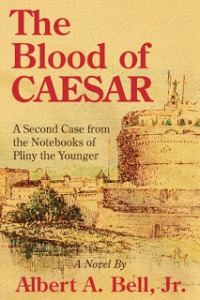 The Blood of Caesar, A Second Case from the Notebooks of Pliny the Younger is the second book in a series of historical mysteries taking place in the Roman Empire in the first century. This particular book is set in the summer of 83 A.D.

The author, Albert Bell has been a history professor, holds a PhD from UNC-Chapel Hill, as well as an MA from Duke, and MDiv from Southeastern Baptist Theological  Seminary. He has been writing since his high school years, first publishing in 1972.

Bell uses historical figures and events to set up his mysteries. The real Pliny the Younger wrote hundreds of letters which are still considered valuable for the time period. Pliny was also an eyewitness to the eruption of Vesuvius in 79 B.C., and Pliny the Elder lost his life there.

In this second book, Pliny is first asked by the emperor Domitian to trace references to an unknown heir of Augustus Caesar from a part of a letter. He is then asked by a friend to look after a young woman whom the friend claims is a relative, but he will give Pliny no details of her family or explain why her life is in danger. It is not long before Pliny’s own life is in danger as he attempts to unravel the two mysteries without offending the emperor.

I enjoy reading historical fiction from all time periods, and reading mysteries in these different eras and locations adds a certain spice to the reading. Working on my own book of historical fiction, I’ve been reading with an eye as to how authors are able to add both historical detail and locale descriptions without overwhelming, or just flat out boring, the reader. Bell does a good job of describing the city of Rome, as well as the surrounding countryside. He has created engaging characters that help a reader understand the time period in which they live. Pliny has a good friend, Tacitus, (another character from history) who provides some humor and serves as a foil to Pliny’s somewhat staid behavior.

I can also recommend the first book in the series, All Roads Lead to Murder.

There are three more books in the series, and I’m looking forward to finding them and reading them as well. For my local friends, these first two books are available at both Union County Public Library and Charlotte Mecklenburg Library.