I probably should have worked on this post last week, but better late than never. I did take a few days away from writing during the holidays, but I spent the last few days of 2016 trying to start my next book which I suppose I should call “The Continuing Saga of Solomon”. Well, it’s just a working title.

So, I’ve been reading blog posts on everyone’s favorite books of 2016, so thought I would go to goodreads and find out what were my favorite books this past year. All of the books I’m going to mention were either four or five star for me but that does not mean there weren’t a few others that hit that mark. Trying to keep it down to sixteen was a challenge. Sometimes, though, I think I’m too generous with my stars (especially if I’m struggling with my own writing and feel that any writer who actually finished writing a book should receive at least two stars for that accomplishment alone), but, regardless, I will only mention books today that were either my top favorites or were by a new author for me.

For my top fiction, one of the first books I read in 2016 was Kate Morton’s The Lake

House. I loved it and wonder why I still haven’t read more of her books. But I will.

Looking over the fiction books I read, I noticed I read several books which are the first in a mystery series. This makes these books even more special as it means there are more books by these authors that can I look forward to in 2017. (And I actually have already read the second in a few of these series). These books (in no certain order): What Angels Fear by C.S. Harris; The Anatomist’s Wife by Anna Lee Huber; Raven Black by Ann Cleeves; The Merchant’s House by Kate Ellis; and The Lewis Man by Peter May. I also read two by Tana French (the second and third in her series). I don’t think you can go wrong with her. Looking forward to reading the next in her series soon.

I’m doing a reread of Robin Hobb’s Farseer series. I read both Assassin’s Apprentice and Royal Assassin in 2016. She is an amazing writer and though her books are fantasy, I feel can learn a lot about writing historical fiction from her writings. She is great at both setting and characters.

Other favorites in fiction: The Marriage of

Opposites by Alice Hoffman; The Architect’s Apprentice by Elif Shafak; Plainsong by Kent Haruf; and Beneath a Golden Veil by Melanie Dobson.

Not counting the two by Tana French, that’s twelve. Since the Robin Hobb books are rereads, maybe I shouldn’t count those, but didn’t want to leave her out.

Obviously, I can easily mention more than sixteen, but I will round this out with my top four non-fiction: None Like Him by Jen Wilkin; An Editor’s Advice by Betty Lerner; The Elephant Whisperer by Lawrence Anthony; and A Woman of Contentment by Dee Brestin.

How about you? Any books that stood out for you in 2016? Have you set any reading 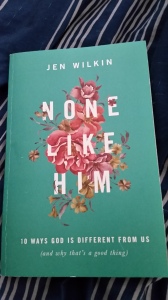