A long day finally over, the sheep

found places to rest–some to lay their heads;

others to keep watch over their flocks (many

of them destined to be a sacrifice

for man’s sins), alert for any dangers

Under a clear sky with stars so bright,

the night air took on a chill, causing the

sheep to huddle together and the shepherds

to wrap their cloaks around themselves and most

stayed near one of the fires kept burning throughout

the night. The men on the first watch neither

saw nor heard anything to make them believe

this night would be any different than hundreds

of others. When their time was ended, they 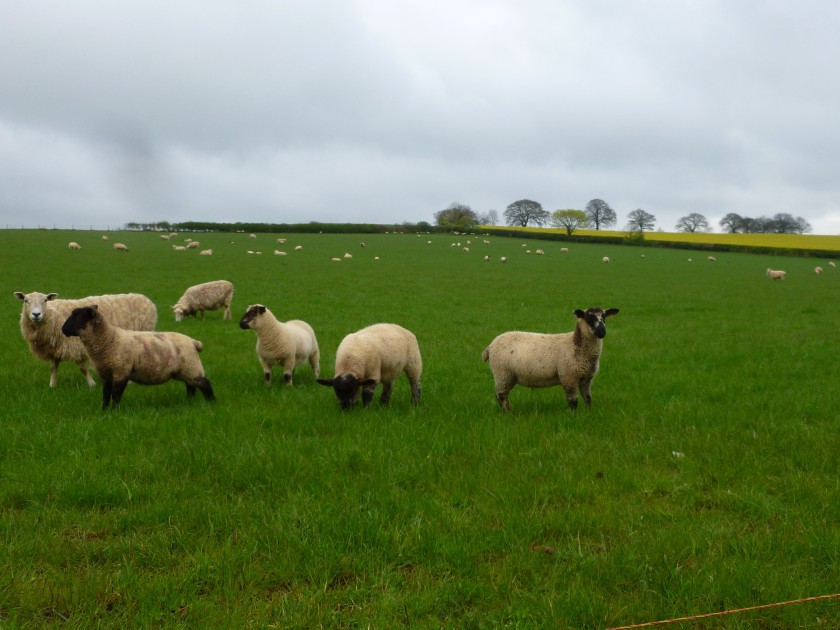 went to wake their companions for the second

watch. Before they could rouse the slumbering

shepherds, a light so bright filled the sky and

caused the poor shepherds to gasp and cover

their faces. Some fell to their knees and one

even stumbled into the companion

he had come to waken causing a stir

amongst the others whose dreams had just been

shattered. But when they tried to open their

eyes and grumble at their rude awakening,

they too were blinded by the light and covered

their faces in fear. Barely able to

think or breathe, they heard a Voice speak from–

where? The Light? The sky? It seemed to fill the

very air. “Do not be afraid!” the Voice

cried out. Though still they trembled, they slowly

lowered their arms and their hands from their

faces; and their eyes began to make out

a form. A form so majestic they knew

it was no ordinary being and

had to have come from Heaven. “Behold!”

the Being proclaimed and as he continued

to speak, the shepherds ceased their trembling and

stared and listened in awe. Even the sheep

had shaken off their drowsiness and seemed

to be listening as well. “I bring you

good news that will bring great joy to all

people. Today in Bethlehem, the city

of David, a Savior has been born to

you. He is the Christ, the Messiah, the

Lord. And this will be a sign for you: you

will find a baby wrapped in cloths and

lying in a manger.” Before the shepherds

could marvel at these words, the Messenger

Being was, in an instant, joined by a

whole host of more of these Heavenly Beings.

They began to sing in voices so sweet,

the shepherds stood entranced and the sheep

bleated softly as if in accord with

their song. “Glory to God in the highest

of heavens, and peace on earth among all

those who delight Him.” And as suddenly

as they had appeared, the messenger choir

was gone, leaving the shepherds to stare up

into the star-filled sky as if waiting

for more miracles to appear. The sheep,

however, knew the heavenly show

was over and so settled themselves to

When a used bookstore is right in front of you-- you stop in to see what you can find. #2ndandcharles #Isabelallende #growingtbr #usedbooks #booksintranslation #spanishwriters
When your daughter has to fly back to her base on Valentine's Day, you get to keep her flowers along with your own. #valentinesday2020 #extrabouquet #bonusvalentine #sorrykelsey
Completed first book for Modern Mrs. Darcy book challenge. Book in translation. Why did it take me so long to read #Isabelallende ? #mmdchallenge2020 #bookintranslation #spanishliterature
Two years ago the weather was a little different here in NC. #winter #snowyday #winterspast
Happy New Year! #snowflakebookstack #snowflakebooks #winterreading
Looking for a book recommendation (from someone I trust). #readingchallenge #mmdchallenge #mmdchallenge2020 #booksfor2020 #newyear
%d bloggers like this: