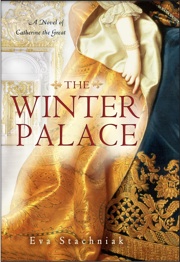 St. Petersburg, October, 17, 1756 Three people who never leave her room, and who do not know about one another, inform me of what is going on, and will not fail to acquaint me when the crucial moment arrives.–From the letter of Grand Duchess of All the Russias (later Catherine the Great) to Sir Hanbury-Williams, British ambassador to the court of Empress Elizabeth.

So begins The Winter Palace, an historical novel about Catherine II of Russia, also known as Catherine the Great. Catherine was born as Sophia in Prussia and brought to Russia to marry the nephew of the Empress Elizabeth. This story takes place during the years of 1743-1764 and told through the eyes of a girl who becomes a friend and ‘tongue’ of Catherine. Barbara, or Varvara, is also a  ‘tongue’  (or what we would call a spy) for the Empress Elizabeth.

Stachniak, born in Poland and author of several other historical novels, has written an intriguing and fascinating account of Catherine’s young life. Rich, historical detail give us a picture of the court life of Russia during this time and the constant danger of trusting anyone. Catherine did not become popular overnight and was at the mercy of the Empress Elizabeth. Catherine’s husband, the future Emperor Peter III, was much like a child and as much a pawn for the Empress as was Catherine and the children she bore.  Catherine shows hints of her future greatness as she keeps her wits, makes friends where she needs to, and prepares to take the throne when the time is ripe.

The Winter Palace is due to be released in January of next year.

I received this book for free though Goodreads First Reads.

2 thoughts on “The Winter Palace by Eva Stachniak”