Time for a random book review! I’ve read several good books already in 2018, so I’ll start my reviews with the latest from Bernard Cornwell. Cornwell is well known for his Sharpe series as well as Uthred in the Saxon Stories. Though still historical fiction, Fools and Mortals is a bit of a departure from his normal writing. Here, Cornwell gives us a behind the scenes look at Shakespeare and his company as they attempt to make a living putting on plays during the time of Queen Elizabeth I. 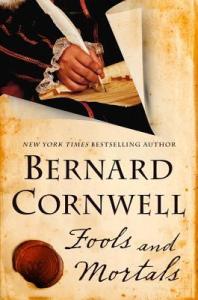 Richard Shakespeare is a struggling actor, overshadowed by his older brother William. Richard is approached about stealing a manuscript from his brother (original plays are quite valuable). Since William refuses to give Richard any manly parts in his plays (Richard is quite good at playing the parts of women), this is tempting for him on several levels.

Having just learned about the page 69 test (https://killzoneblog.com/2018/03/have-you-ever-tried-the-page-69-test.html), let me read to you from page 69 and you can decide if this book is for you.

“I thought he would say more, but he went back to his writing. A red kite sailed past the window and settled on the ridge of a nearby tiled roof. I watched the bird, but it did not move. My brother’s quill scratched. ‘What are you writing?’ I asked.

‘So the new play is finished?’ I asked.

‘You heard as much from Lord Hunsdon.’ Scratch scratch.

‘In which I’ll play a man?’ I asked suspiciously.

His answer was to sigh again, then look through a heap of paper to find one sheet, which he wordlessly passed to me. Then he started writing again.”

Does this excerpt from page 69 intrigue you? Since this book started a little slow for me, maybe this would have been a better place to start–but, no, I believe the beginning was necessary.

You can listen (or read) an interview from Cornwell done by the Folger Shakespeare Library on the writing of this book.

Cornwell does not seem to have any plans to turn this into a series, but I, for one, would be glad to read more of Richard Shakespeare if he should changest his mind.