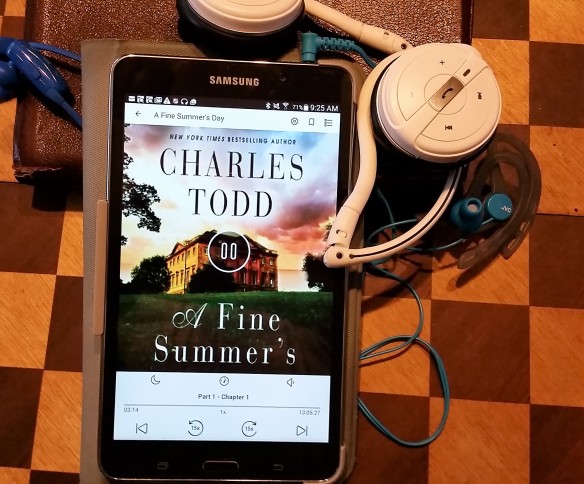 In the past few years, I have been listening to audio books more and more. I first began listening to them on my daily walk as it was rather dangerous to try and read a book while walking. Since I discovered bluetooth headphones, I can listen even more while cooking or performing those necessary evils known as “housework”. Last year I began to listen to them as I’m driving. I had tried to listen in the car at different times, but found my mind wandering too much to keep up with what was happening and thoughts of “where did that character come from?” were occurring too often. Then my son broke his leg, and I was spending more time on the road making daily trips to and from his school, so I decided to try listening again and was soon hooked.

I’m not sure why “listening” to books took some getting used to since, after all, that is how I was first introduced to reading. As with most people, my first introduction to the world of books was my mother reading stories to me. I also remember listening to books on a record player (you know, LPs or what are now known as “vinyl”) at school. I heard the books of both Wrinkle in Time and The Hobbit when I was in fourth and sixth grades. Though I have since read the print version of both these books, the memory of hearing them while sitting at a desk (breaking into my usual daydreaming) makes them more special than most.

I don’t believe audio books will ever replace the written word for me, but I am glad to have found a place for them. Anyone that enjoys listening quickly learns that finding a narrator you like is as important as finding favorite authors. Also some books just are easier to listen to than others. For me, those with a great deal of description tend to put me to sleep. Others are harder to keep track of the characters and the scenes without being able to go back and review. But, I’m getting better.

The most entertaining books (for me) are those in a series. Once you’re in a series and are familiar with the characters, it seems easier to stay focused. Another plus is having a narrator with whom you’re already familiar (change the narrator in the middle of the series and fans will complain loudly). A young adult, scifi series I’ve enjoyed over the past few years is Marissa Meyer’s Lunar Chronicles.  For historical mysteries, I’ve listened to several books from Jacqueline Winspear’s Maisie Dobbs series as well as books from the two series by Charles Todd. Simone St. James writes historical mysteries with paranormal aspects. Others I’ve enjoyed include: Stella Bain by Anita Shreve; Bone Gap by Laura Ruby; and The Sun is Also a Star by Nicola Yoon.  I found The Sun is Also a Star enjoyable as an audio because there were multiple narrators. Some books have put me off when a male tries a female voice and vice versa; but, not always.

Every year awards are given by the Audio Publishers Association (APA) which “recognizes distinction in audiobooks and spoken word entertainment”. Looking these up, as well as past winners, is a good way to find books you might enjoy listening to. For a list of the recently released finalists of 2017, check out AudioFile’s webpage: http://www.audiofilemagazine.com/audies/?utm_source=email&utm_medium=20170222-nl3feb-audiestxt1

What about you? Have you jumped on the audio book bandwagon yet? Any favorite books? Narrators? Most people listen to audio books while performing other tasks. What else do you do while you’re listening?