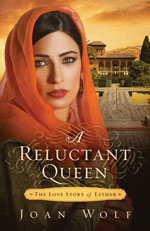 When I first heard about this book, A Reluctant Queen, I was not very interested in reading it. Yes, you could say I was ‘reluctant’. Why? Because I have heard the story of Esther many times; I can read the ‘real thing’ in the Bible any time, and another version just sounded boring.

So, why did I pick it up and read it? One, I read a couple of favorable reviews from readers I respect on goodreads.com; and, two, I had read some historical fiction by Joan Wolf years ago and really enjoyed them. So, I decided to give A Reluctant Queen a try.

Since I’m taking the trouble to write a review here, you can probably guess by now that I enjoyed this book and highly recommend it. It is historical fiction, so don’t take the few liberties Wolf takes with the story disturb you. She does a very good job of giving reasons for Esther being sent by her Jewish uncle to enter the Persian king’s beauty contest.  She may or not be right, but it’s a question I always have when I read the story, so it adds a new dimension to the story. She brings the characters to life, giving them personalities and filling in some of the historical background, making the story believable and interesting.

To learn more about Joan Wolf and an upcoming book (The Scarlet Cord), check out her website: www.joanwolf.com