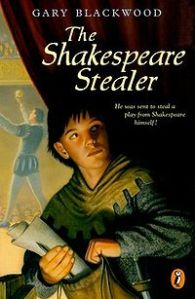 The Shakespeare Stealer  by Gary Blackwood is an enjoyable way for upper elementary and middle school students to learn about the historical background of Shakespeare’s time. In this book, a young boy, Widge, is taught to write in a special cipher by his master. He is bought by another man, who instructs him to sit in on a play (Shakespeare’s Hamlet) and to take down every word in this cipher.

Widge tries to do as he instructed, having little choice, but gets in various amounts of trouble and ends up being part of the players themselves. To his surprise, he discovers he actually has some acting talents. More importantly, he learns about friendship, loyalty, and how to make some hard decisions.

The Shakespeare Stealer is geared toward middle schoolers, but I don’t believe it is too young for those in high school. I enjoyed reading it myself and found it a good way to learn more about that time period, and seeing it from a young person’s point of view.

There are several study guides available. There is one online that was created by some students at Salisbury State University in Maryland intended for middle and high school teachers. It includes various activities, websites, an author study, and other links pertaining to Shakespearean study. You can access this site at: www.faculty.salisbury.edu/~elbond/stealer.htm